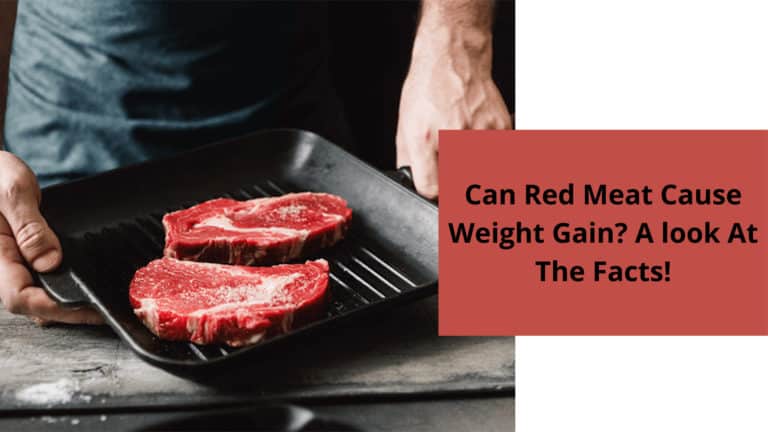 With the recent shift towards following a healthier lifestyle and increasing awareness about the perils of obesity, there has been a positive trend involving people trying to find foods that are good for their bodies. This movement is being supplemented by subsequent flushing out of any foods that can add to your health woes, such as weight gain, heart ailments, diabetes, blood pressure, cholesterol, and blood sugar, among others.

Since an unnatural amount of weight gain generally contributes to the above-mentioned issues, it seems prudent to adopt an eating plan that restricts the consumption of foods that lead to it.

Red meat, one of the most favorite meats of all time, has recently come into contention regarding whether or not it leads to weight gain. If you too have been wondering the same and looking for evidence to cut it out or include it into your diet, then read on to find out more!

How Can It Add To Weight Gain?

Red meat is a good source of protein, which should ideally make it a food item that assists weight loss. However, due to high amounts of iron in red meat, it can lead to an unnatural gain in weight when consumed in excess. According to researchers, when one consumes an excess of iron, it leads to an inhibition of the hormone leptin. This hormone is commonly known as an appetite suppressing hormone, due to its ability to signal to our brains when the stomach is full. When this hormone decreases, it fuels us to overeat, since the signal the tells us we’ve eaten enough is no longer there. And as you might have already guessed, this overeating in turn leads to weight gain.

Furthermore, red meat, which is usually consumed in a processed form, is known to add to a plethora of long-term diseases such as diabetes, cholesterol, et cetera. Excess consumption of this type of red meat can lead to an excess of preservatives in your body, which in turn contributes to heart failure and its related ailments. Maintaining hygiene when purchasing red meat can also be quite an insurmountable task since it carries a host of bacteria, which unless cleared out, can lead to food poisoning as well as gout.

What Does The Research Say?

In a study conducted by the Wake Forest Baptist Medical Center, a couple of male mice were separated into two groups in order to determine the effect of the excess proteins in red meat on their bodies. While one group was fed a diet rich in iron, the other was made to consume a low-iron diet. Iron cannot be excreted, and as a result, it was found that in the group that consumed high amounts of iron-rich foods, there was an accumulation of iron in their system with consequent suppression of the hormone leptin. This meant that their food intake was a lot higher than their counterpart group, which effectively proves that the high amounts of iron present in red meat indeed pose a risk in terms of weight gain. In fact, it can even lead to an onset of fatty liver diseases, diabetes, et cetera, which leads to a further deterioration in your health.

Should You Consume Red Meat?

While the aforementioned health risks of red meat are true, it does not mean that you have to cut it out of your diet entirely. What’s important is that you be mindful of how much you consume. Portion control is extremely important when it comes to red meat since it can make or break its positive effects on your body. A recommended optimal serving would not exceed about two to three servings of red meat in a week. However, try to substitute red meat with lean meat as much as possible in order to keep a close eye on that waistline.

Red meat does in fact contribute to weight gain, but only when consumed in excess. Red meat still has some positive effects on your system, so there is no need to remove it from your diet altogether. Watch over how much of it you eat in order to avoid an iron overload in your body. Steer clear of processed red meat as much as possible, and try to find local sources so that you can remove the risk of consuming additional preservatives.