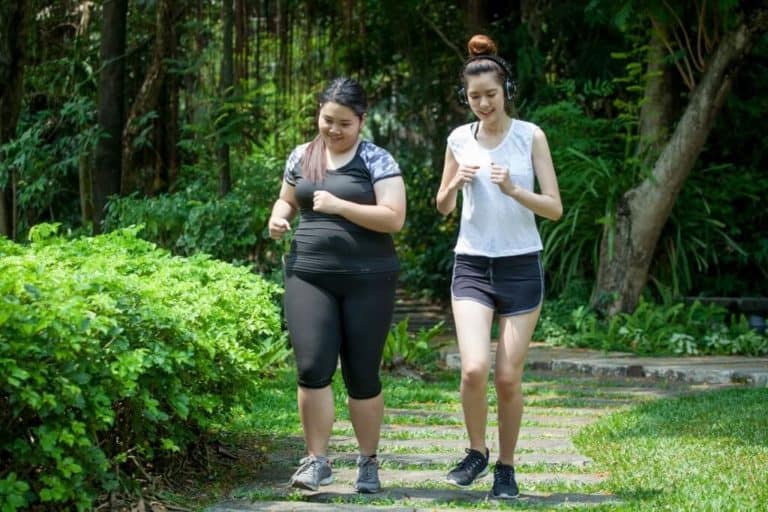 Obesity and being overweight is one of the major causes of concern in most countries in the world and lead to chronic diseases such as diabetes, heart disease.

Weight gain gradually builds up as the body continues to consume more calories than it burns. The build-up and accumulation of calories lead to weight gain. It has also been observed some people who eat in larger quantities seem to put on very little weight.

These observations led dieticians and health practitioners to conduct extended studies to detect any genetic pattern on how they influence the gain or loss of weight in people. Genes are cellular particles that are found in the chromosomes which are present in the nucleus of body cells.

Genetic traits cause people to inherit traits from parents, relatives, and ancestors.

The phenomenon of low weight gain even after consuming above normal food quantities is linked to cell absorption which is a genetic trait.

Genes indirectly influence obesity by affecting metabolism, the craving for high-calorie food, body fat distribution, and ways to cope with stress. These factors determine how much a person consumes or stores fat.

Most factors that influence weight were found to be due to complex interactions among multiple genes combined with several environmental factors that have still not been understood as yet.

The amount of weight of a person which is within limits is calculated by means of the Body mass index (BMI) which is a ratio of weight to height.

The results of research on a wide range of people have revealed that 25% of genes carry the codes for being overweight. In some people, this may be as high as 80%.

The research also found that in households where parents are obese, there was an 80% probability that children would also be overweight.

A phenomenon known as insulin resistance has been the subject of research and the reasons are still not clearly understood. Insulin resistance is a body condition where cells use energy from glucose in the blood and regulates insulin to neutralize the glucose that is in excess.

In time, the body does not respond to insulin, excess glucose remains unconverted and glucose levels begin to increase in the blood. This is the precursor to diabetes.

A clinical professor at the Albert Einstein College of Medicine says that people normally inherit traits such as eye and hair color, height, and also body type but there is no particular gene that is directly linked with weight. Harvard Health Publishing has mentioned that there are 400 genes linked with body weight.

Another study by the International Journal of Obesity found that people with a genetic tendency to obesity started gaining weight from the age of 20 in comparison to those who did not have this genetic tendency.

Another study in May 2020 published in a magazine named Cell studied the DNA patterns of 47000 people and found a trend of genetic variants in thinner persons, indicating that a specific gene may cause lower body weight. This is still a subject that needs more study.

The center for Disease Control and Prevention (CDC) in the United States has stated that genes form the basis of the body’s signal and response system and that this signal and response system regulated food intake. The CDC cites a theory that the human body has been primarily designed to maximize food intake to prepare for survival and that this primal tendency remains though we have more food today than we need.

Our Medieval ancestors would have a hearty meal before going out on an expedition to gather food as energy would be required for these expeditions. Today, there are no food expeditions to go to but the food intake continues.

Though there is a genetic trend that has not been confirmed fully, exercise and a proper diet are necessary to control weight and not rest by attribute weight gain to genetic influence alone.

You Can Also Read: How To Identify Asthma Triggers? Common Triggers Explained