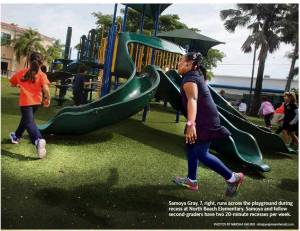 The front page of the March 28, 2016 edition of the Miami Herald, featured a nearly full page article about the efforts of parents in South Florida to demand more recess time for their young children.  After Florida’s legislature failed to pass a law mandating recess during the current session, parents decided to fight for their children’s right to play.  They have so far gathered over 6,000 signatures on a petition demanding a minimum of 20 minutes per day of recess for pre-K, kindergarten, and elementary school students in the Miami-Dade public schools. Find their petition at Change.org here.

“Kids need recess,” Paula Zelaya, parent of a first grader at Downtown Doral Charter School, was quoted as saying.  “I think that they do better if they have a space to relax.”

Experts agree.  Dr. Peter Gorski, a member of the national executive committee of the American Academy of Pediatrics and a Miami pediatrician, mentioned the lack of play in today’s schools and the new standards for teaching and learning.  “They are defeating their very academic purpose by denying or cutting back on free, supervised play.”  He went on to say that activities such as a video-led dance break called GoNoodle isn’t a substitute for child-directed, free play when children can choose what they want to do and who they want to play with. “Imaginative play can only happen when there’s free choice involved.  Every child needs to dream, needs to imagine, needs to commuicate.”

The petition calls for a scheduled recess time, preferably outdoors, and that it should not be a substitute for physical education.